The Importance of Dignity in Birth

Whether or not you have a good or bad birth experience isn’t all down to whether you have your ‘ideal’ birth – it’s also about how you are made to feel throughout labour and birth.  Your relationship and experience with your maternity care-givers matters. 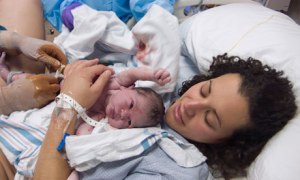 The White Ribbon Alliance, a global organisation which demands the right to a safe birth for every woman highlights the importance of this relationship –

Women’s experiences with caregivers can empower and comfort or inflict lasting damage and emotional trauma. Either way, women’s memories of their childbearing experiences stay with them for a lifetime and are often shared with other women, contributing to a climate of confidence or doubt around childbearing.

In 2013, Birthrights conducted a ‘Dignity in Childbirth’ survey of women’s (and midwives) experiences of maternity care in the UK. Birthrights teamed together with Mumsnet producing a survey shared to Mumsnet, asking women who had given birth in the last 2 years to complete it.  The goal of the survey was to gain a fuller understanding of women in the UK’s experiences of dignity during childbirth.

Birthrights is a UK Charity working to improve womens experiences of pregnancy and childbirth. They describe dignity to mean ‘respect’ and ‘autonomy’ and explain how important this is in maternity, ‘where women are often vulnerable and exposed both physically and emotionally’.

Respectful care and respect for a woman’s autonomous choices are essential to positive maternity experiences and long term health. They are also grounded in Human Rights Law.

Who completed the survey?

Birthrights also asked women about where they gave birth.  77% gave birth in a hospital and 8% in a birth centre (stand- alone/alongside a unit).  The results of the 13% who had home births (which was much higher than the national average of 2%) were not counted, as their experiences ‘would not be typical of the general population’.  This decreased the survey size to 977 women.

Most of the participants in the survey were satisfied with the care they received. Overall they reported low levels of unkindness, felt respected during birth and believed that their health professionals did listen to them. However, there was a significant variation in ‘choice’ and ‘respectful care’ reported by women depending on (a) the particular type of birth they had and (b) the place of birth.

Women who had an instrumental birth reported much higher rates of disrespectful treatment and greater loss of ‘choice’ and ‘control’. The figures relating to consent for instrumental births suggest that forceps and ventouse are often being used without proper ‘explanation’ or ‘consent’ being given.

Women who had a C.B. also reported less satisfaction with their care, though the rates were not as high as those for instrumental births.

The majority of women felt their experience of childbirth had an impact on how they felt about themselves and their relationships with their babies and partners. A positive impact correlated with spontaneous vaginal births and giving birth in a birth centre. A negative impact correlated strongly with experiencing an instrumental birth.

You can read the full survey here.

If you are not happy with any aspect of your care, you can raise this.  If you feel uncomfortable with your maternity care provider you can ask for someone else.  If there is an issue it’s better to raise it, for example if you during labour you would like your midwife to be more encouraging or hands on, just ask – you never know – she/he may be quiet as they are just trying to respect your privacy and didn’t know that you wanted more support and assistance.

One of the things that the Birthrights survey flagged up was the issue of consent not being obtained, especially in relation to certain instrumental births. Birthrights have produced a wonderful factsheet on ‘consent’ some of which I share here:

Consent has to be given as it’s against the law to give medical treatment to a pregnant woman unless she agrees to it. The principle of ‘autonomy’ means that every person has the right to make decisions about their own bodies for themselves.

Consent is required for every medical procedure and must be obtained before any examination/investigation is carried out, or any care/treatment is provided. Once given, consent remains valid for the relevant procedure unless it is withdrawn. Consent can be withdrawn at any time.

Just because you consented to a particular procedure in the past doesn’t mean that you automatically consent to the same procedure again. Consent must be sought each time a procedure is performed. If the circumstances change or new information becomes available and the benefits or risks of the treatment change as a result, then fresh Consent should be given.

In order to give consent a woman must be well-enough informed about the treatment and cannot be put under ‘undue pressure’ or ‘bullied’ into receiving the treatment by healthcare professionals or family members.  ‘Undue pressure’ can include physical restraint, threats to withdraw care, repetitive and unwanted discussion of risks, imposing an arbitrary time limit for a decision, and putting pressure on other family members.

Women must be given information about any proposed procedure in advance. The information should cover any significant risks (including the risks to her unborn child), any alternative treatments which are available and the risks of doing nothing.

Consent may not be valid if  a women is given misleading information about her medical condition or the proposed treatment, or not given relevant information.

Health care professionals must provide enough information so that the general nature and purpose of the treatment is properly understood.  If you are unsure of anything – do ask questions.  The GMC (General Medical Council) actually advises doctors to encourage patients to ask questions – so don’t be shy to ask !

You can ask for some privacy or time to yourself to discuss and make the decision with your birth partner.  You can also ask what happens if you do nothing?  If both mum and baby are fine, perhaps waiting and giving your labour a little more time to progress naturally may be just what you and baby need?

Birthrights produce helpful Factsheets about your rights and the law in pregnancy and childbirth on topics like Consent, Choice of Place of Birth, Rights to Medical Assistance, Birth Partners, Unassisted Birth and more.

Speak to your GP and midwife about the options available to you.  It’s important to choose a place where you feel safe – and you can change your mind.  Which have created a Birth Choice Tool aimed at helping women decide where they wish give birth.

The Birthplace in England Research Programme focused on birth outcomes in healthy women with straightforward pregnancies who are at ‘low risk’ of complications and compared the safety of births planned in four settings: home, freestanding midwifery units, alongside midwifery units and obstetric units. This study is ‘older’ and included births in NHS hospitals and Trusts in England between 2008 and 2010 – you can read about it here.

Healthwatch Newham are currently conducting a survey to find out about the experiences of women who live in Newham and have given birth in the last 2 years.  They are interested in all experiences from Newham University Hospital, Barkantine Health Centre or Barking Community Hospital. They would like to hear about both positive and negative experiences.  Their survey takes 10 minutes to complete.  Experiences gathered will be used to recognise what is working and where improvements can be made.

If you are unsure of anything shared in this post, please speak to your GP or midwife about it.

At Yogalime we provide Pregnancy Yoga Classes sharing many techniques and practices to assist and support women during pregnancy, birth and beyond.  If you would like to join – click here.